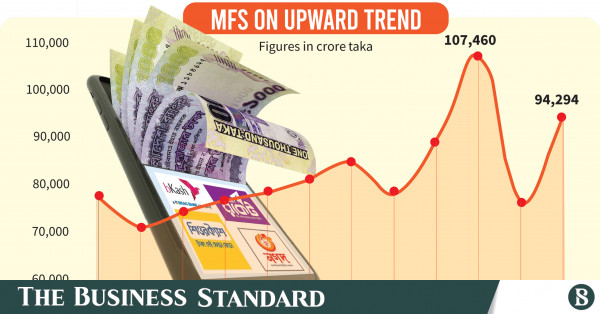 Mobile financial service (MFS) providers such as bKash and Nagad reached the second highest transaction ever of Tk 94,294 crore in June.

The highest transactions of Tk 107,460 crore occurred in April thanks to financial transactions centered on Eid-ul-Fitr.

According to Bangladesh Bank data, mobile banking transactions stood at Tk 76,312 crore in May, which is lower than other normal periods.

Officials from several MFS vendors said that by the time Eid-ul-Fitr fell at the very beginning of May, most festival-centric transactions, including bonuses and purchases, had taken place. the preceding month.

Transactions in the month after Eid are understandably lower than the previous month, according to industry insiders.

Shamsuddin Haider Dalim, Head of Corporate Communications at bKash, said, “According to recent data from Bangladesh Bank, transactions through MFS saw reasonably better growth in April due to the Eid festival. In May , transactions fell for the obvious reason of the Eid holiday and returned to normal growth in June.”

He said the convenience of digital transactions, diverse customer-centric services and products, and constant investment in technology by MFS providers like bKash have strengthened the country’s digital payment ecosystem.

“Additionally, the government itself uses MFS platforms to disburse social safety net benefits, allowances and financial aid as well as to collect fees, taxes, etc. Through this, customers are becoming accustomed to digital transactions every day,” he added.

According to central bank data, customers of MFS providers transacted more than 46 crore times in June – the highest monthly transactions on record.

Customers cashed out Tk 27,420 crore and cashed out Tk 26,692 crore. Additionally, MFS users transferred person-to-person balances amounting to Tk 24,521 crore. Each of them is higher than the previous month.

According to central bank data, total transactions through MFS providers in the 12 months to the end of June 2021 was Tk 759,556 crore. That is, the average transaction per month was Tk 63,296 crore.

From July 2021 to June this year, the total transaction was Tk 990,004 crore. An average of 82,500 crore of Tk was processed every month. In other words, the average transaction per month has increased by 30.34% over the last year.

The number of MFS accounts has increased by 29 lakh in the last month. At the end of June, the number of accounts increased to over 17.86 crores. Among them, over 10.35 crore accounts are held by male users and over 7.46 crore by female customers.

The number of other accounts such as institutional accounts is 3.94 lakh. The central bank said the number of MFS accounts grew by more than 2.26 crores over the past year.

Bangladesh Bank started mobile banking business in 2010. Mobile financial services started their journey in the country on March 31, 2011 with the launch of Dutch-Bangla Bank Mobile Banking.

According to the latest data from the central bank, there are currently 13 banks offering mobile banking services in the country under different names such as bKash, Rocket, UKash, MyCash and SureCash. They provide services such as sending money, collecting, disbursing, paying salaries, donating to the poor, paying allowances, remittances, paying for different government services, paying for tolls, payment of credit card bills and insurance premiums.