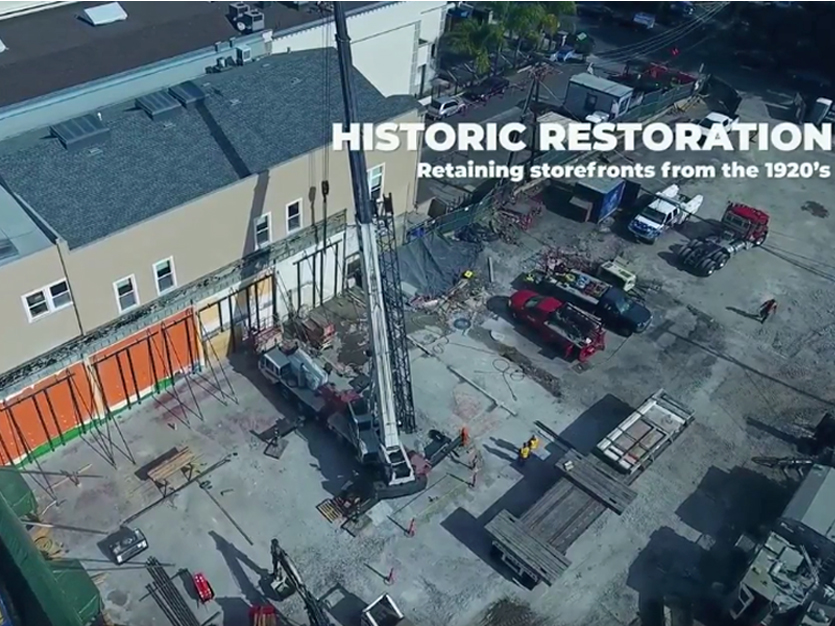 According to project owner Acclaim Companies, the four-story development, which was approved by Redwood City Council last summer, will merge four existing lots on the site into a “neoclassical mixed-use building.” The office and retail project includes 246 public underground parking spaces and 50 bicycle spaces.

As partially described in the video, the project is particularly interesting because it will preserve and enhance three historic storefronts from the 1920s. Large parts of the existing exterior walls, including the street facade, the side wall next to the Odd Fellows building and the rear east wall, will be preserved and renovated.

Here is the description of the conservation effort and project as delivered this week by Acclaim Companies and WL Butler.

“The panels next to the Odd Fellows Building and the rear east wall are carefully removed, stored and reinstalled under the supervision of a consultant who specializes in historical renovations. Main Street’s facade is being protected in place to ensure that the historic cornice features are preserved. A stepped four-storey building is being built around the historic building walls, and a public art gallery will be housed in the lobby of the new building. The office space will include raised outdoor areas. The upper floors are set back 40 and 25 meters from the street as they are four floors higher. The bulk of the building is lower along Main Street and gradually rises to four stories along Walnut Street. This tiered mass creates several terraces that overlook Main Street. Trees are also being planted along Main and Walnut Streets. “

DES Architects was the architect of the project.